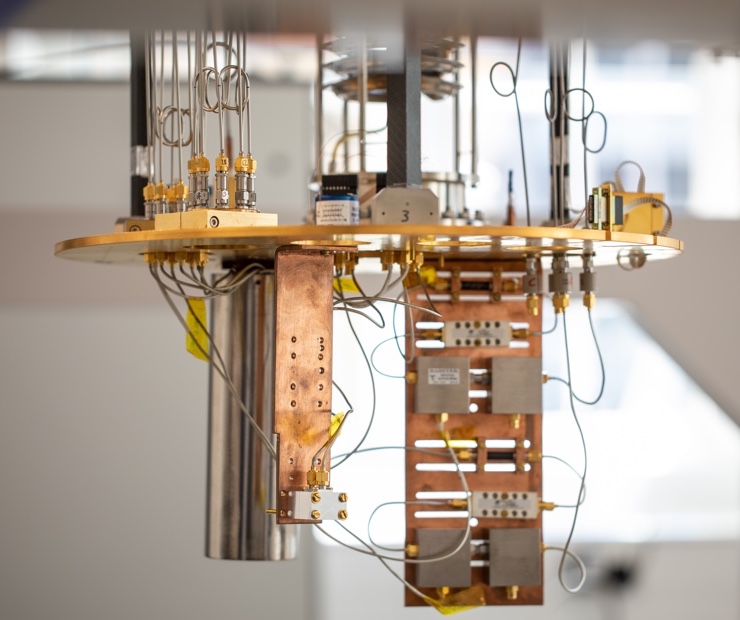 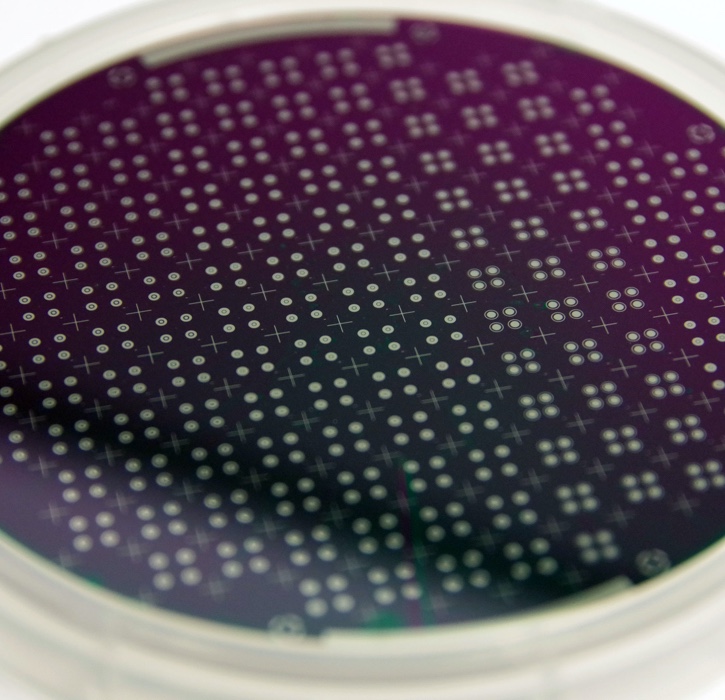 The UK’s most advanced quantum computer

OQC’s quantum computer is already a complete functioning unit, including the backend, the control, the hardware and the software. With four-qubit, our device is the most advanced and the only commercially available quantum computer in the UK. 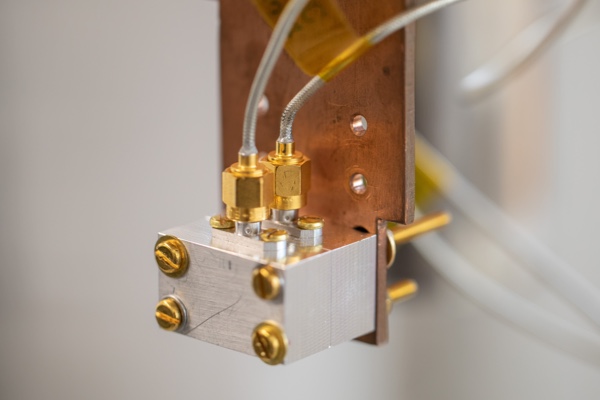 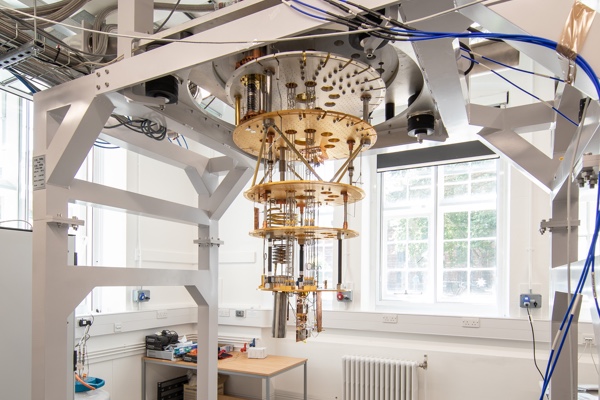 Build the core,
partner with the best

We partner with some of the most renowned universities, startups and companies. This unique approach will ensure that our technology is at the heart of tomorrow’s quantum revolution. 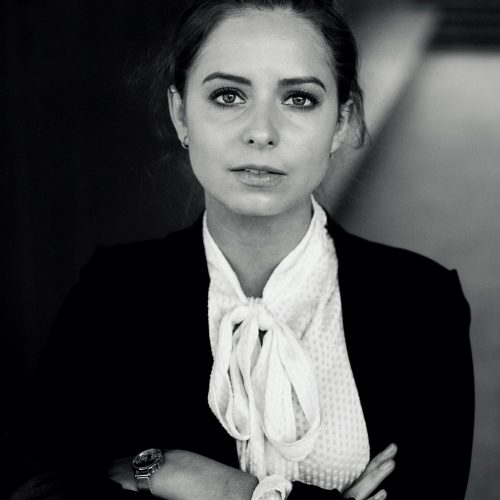 Ilana is the CEO of OQC. In her role she is responsible for setting the strategy and direction of the company, defining and modelling our culture and values, building and leading OQC’s senior team, and for allocating resources to the company’s priorities.

Ultimately, Ilana makes sure that OQC remains at the forefront of the quantum revolution. Thanks to her academic background, having gained a PhD in quantum physics from Royal Holloway, University of London, where she spent most of her PhD as a student in industry at the National Physical Laboratory, Teddington, she’s also providing technical input in the design of our quantum computer.

Ilana’s ambitions can be summed up in a single word that comes up a lot in a conversation with her: impact. Not just in the fledging quantum computing industry, but in the world writ. She believes in pushing the boundaries and doing things that have never been done before, thanks to quantum computing.

Ilana takes pride in breaking grounds on multiple levels: as a pioneer in quantum physics and as an executive woman in tech. When she’s not roadmapping, speaking at an event, reporting to the Board, pitching investors, hiring more ninjas or giving interviews, you might find her playing the piano, enjoying live music nights or boxing at the gym. 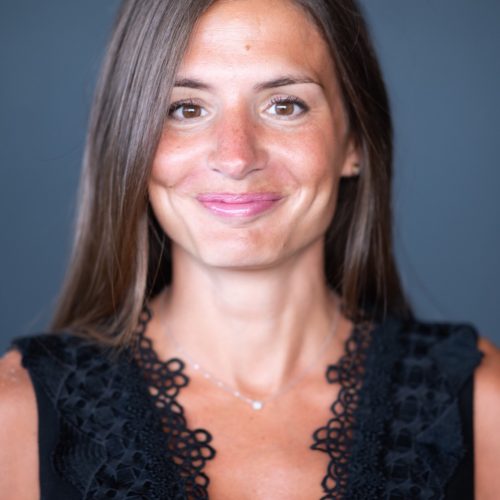 Anne-Claire joined OQC to help us accelerate our go-to-market strategy and provide the best experience to our various stakeholders. As such, she is responsible for the commercial strategy and growth of the company through sales, partnerships management and customer success. She is also revamping our communication and marketing operations to tell the OQC story to the world. Recognising that our disruptive tech can only thrive thanks to our A-team, Anne-Claire is also championing our people and culture projects.

Prior to joining OQC, Anne-Claire was Strategic Partnership Director at what3words, another groundbreaking tech startup. Previously she had led the work of a United Nations’ agency on environmental and social sustainability; and helped established the corporate social responsibility program of the French national lottery. She also worked as a consultant to multiple CAC40 companies to address their technological gaps. 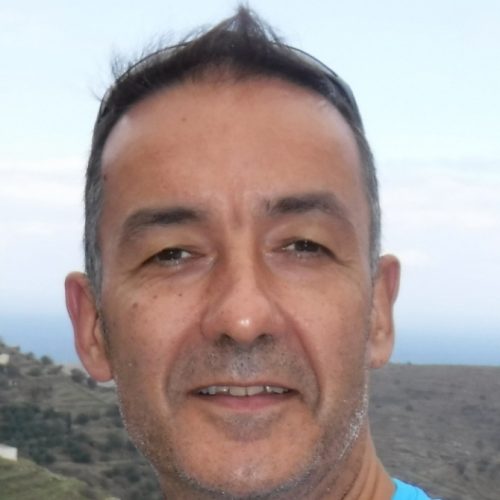 Mark has joined OQC as the Director Technology Strategy Development and Implementation.

He is an accomplished technology strategist and leader, as well as Head of Programmes and Delivery, in both the public and private sectors, and has a proven track record in leading and delivering within high pressure, rapidly changing, technology and people driven environments. He has extensive commercial experience both as a leader in commercial technology development and consulting and also as an independent technology and business architect supporting a wide range of government, defence and security, and FTSE 100 organisations in the UK and abroad.

Mark has a passion for trail running, ultramarathons and the mountains as well as mountain biking and everything outdoors. 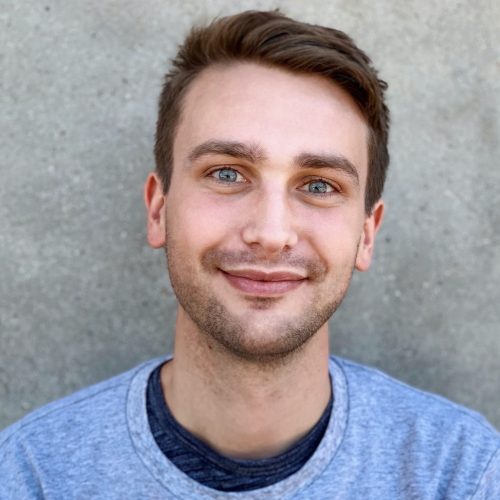 Brian is an engineer that specializes in quantum hardware development with 10 years of quantum tech experience. At OQC, Brian is a part of the quantum engineering team developing commercial-grade quantum processors.

Originally from the United States, Brian moved to the UK in 2017 where he has served as a Marie Curie research fellow at the University of Oxford focusing in superconducting quantum circuits. Previously a research staff scientist for IBM, Brian helped develop their large-scale quantum computing platform. He was also a part of the founding team for the ‘IBM Quantum Experience’, the first publicly-accessible quantum computer.

Brian received his PhD in experimental physics at Yale University with work that showed the largest ‘Schrodinger cat states’ to date using microwave photons. Since moving to the UK, Brian has enjoyed running (slowly) through the muddy trails along the Thames and is a self-proclaimed transit nerd. 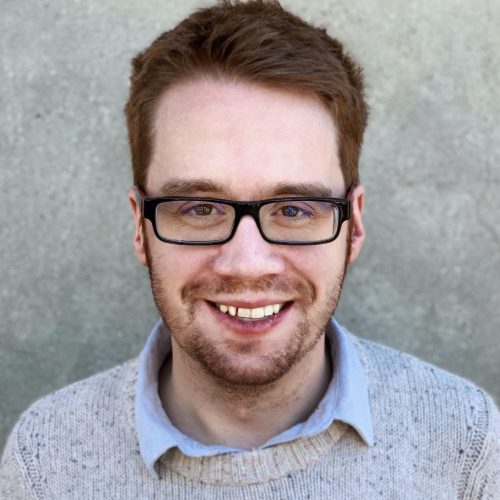 Phil is the Director of Software at OQC. He works with a team of software developers and physicists to develop software solutions for quantum control and quantum research.

Phil completed his PhD in Computer Science at the University of Surrey, UK. He started his career as the CTO of an early stage startup and then went onto setting up a successful VR content company. In both these roles Phil was responsible for leading software design and architecture. His experience in successfully creating and deploying software solutions in startup companies is now applied to the OQC software stack. 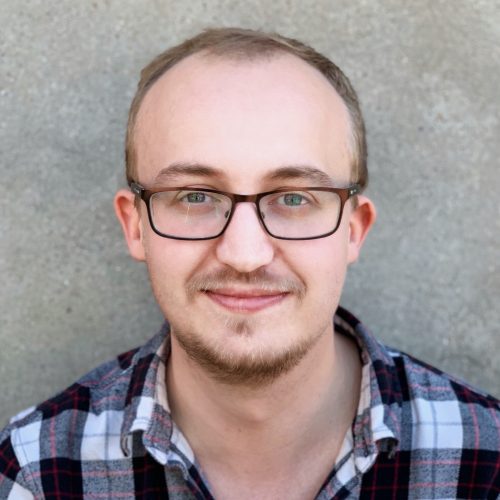 Andy completed a PhD in Peter Leek’s research group at the University of Oxford, largely focused on the calibration and control of their multi-coaxmon systems. As such, Andy has extensive experience in control of superconducting circuits using various microwave electronics systems.

Convinced by OQC’s unique technological approach, and inspired by the can-do and forward-thinking attitude of the team, Andy joined as OQC’s first Quantum Engineer.

His first success, in cooperation with our partners, was to develop a prototype interface allowing an open-source quantum language to execute on our prototype processors. Since then, Andy has spent much of his energy developing our software stack for a much more powerful control system; more capable, flexible and extendable than ever previously developed. Andy also works on the development of the components of a robust, integrated solution for the design and simulation of superconducting circuits.

Having joined OQC at a transition time, from a research-focused organisation to a commercially successful business, Andy enjoys getting stuck-in with the challenges facing start-ups. He has always enjoyed tinkering with software programming, which led him to write web games and build electronics from a young age. That’s why, in his own words, “this all makes helping to build the quantum computers of the future at OQC feel not at all like a chore!” 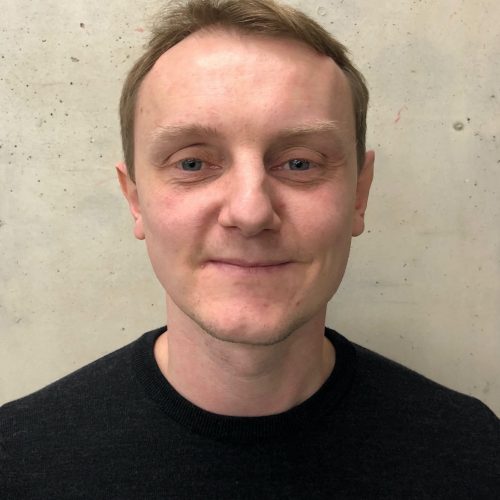 Peter Oakley is a hardware design engineer with a background in PCB design and RTL firmware development. As OQC’s Head of hardware, Peter’s current focus is on the design and development of a novel quantum computing control system capable of multi-platform synchronisation, low latency feedback and upwards scalability. Peter is concerned with both the physical hardware and the FPGA firmware.

Prior to joining OQC, Peter worked for multi-national, blue-chip organisations including ARM, Imagination Technologies and Ensilica and has led multiple COTS products from the ground up, including an ATX motherboard and an extended temperature, rugged SATA controller.

Peter has contributed in the development of multiple large scale, SOC products including a spectrography based gas detector, fingerprint recognition system and a radar-based, MIMO system for autonomous vehicles. Peter has also designed various IP products from the ground up, including a novel, power-aware SPI controller, an I2C controller, a memory controller and a parametrically scalable IIR filter.

Peter has a range of extracurricular qualifications in FPGA design, verification and RF engineering. In his spare time, Peter enjoys rock-climbing and producing music. 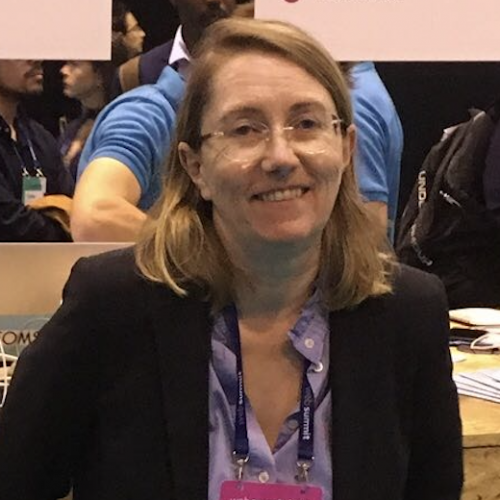 Lydia is OQC’s Quantum Nanotechnologist. As such she is leading the qubits fabrication in collaboration with Oxford University and SuperFab at Royal Holloway University. Her focus is on producing highly coherent superconducting devices first at chip level and preparing for industrial-scale fabrication.

Lydia has worked at IBM Almaden Research in California, as well as at Maxtor and STMicroelectronics. She also co-founded various tech startups. She was CEO of Optim’Match, a startup developing recommendations for web retail based on machine learning. She was also the COO of Encapsulix, a startup designing, building and selling Atomic Layer Deposition equipment for semiconductor manufacturing. 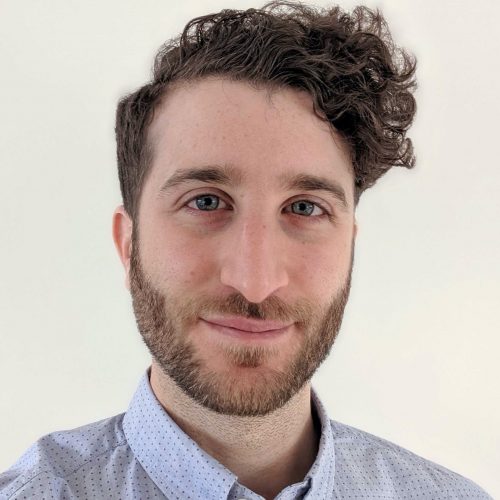 As OQC’s quantum engineer Joseph is primarily focused on the fabrication and experimental realization of OQC’s quantum chips, and the development of the tools and infrastructure that enable this.

Joseph obtained his PhD in physics from the University of Oxford for the development of the coaxial superconducting circuit architecture upon which OQC is building on, and this work formed part of the core initial demonstration of the technology. He is now putting his experience of design, development and characterisation of these quantum devices to work for OQC.

Prior to his doctoral work, Joseph also acquired two years of software development experience with various roles at education and business intelligence startups. Outside of the office, Joseph is a keen rock-climber. 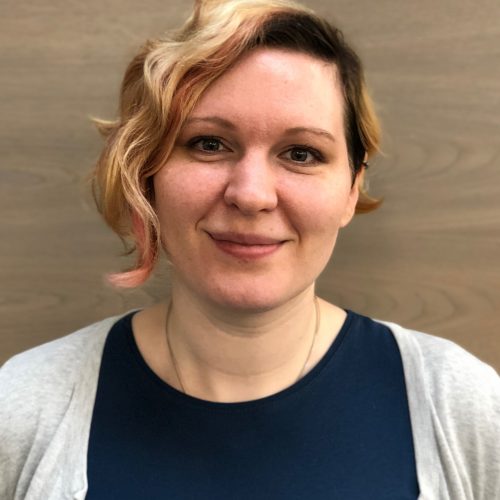 Kajsa first came to Oxford for an internship at Rutherford Appleton Laboratories, where she developed a simulation tool to assist in the evaluation of a ground based laser orbital debris removal system. Once this internship was completed, her passion for cutting edge science motivated her to further her expertise in deep-tech and ultimately become a part of the OQC software team.

As a Junior Software Engineer, Kajsa is responsible for a number of quantum and development infrastructure projects around quantum chip simulation and data management systems.

Kajsa holds an M.Sc. in Electrical Engineering from Lund University (Sweden) and a dual M.Sc. in Space Instrumentation and Technology from Université Paul Sabatier (France) and Luleå University of Technology (Sweden). Originally from Sweden, Kajsa loves the outdoors and takes any opportunity for alpine skiing. When there's no place to ski, she is quite content going for a hike or building a camp in some remote forest. This is fortunate as Oxfordshire doesn't have any mountains and seldom any snow. 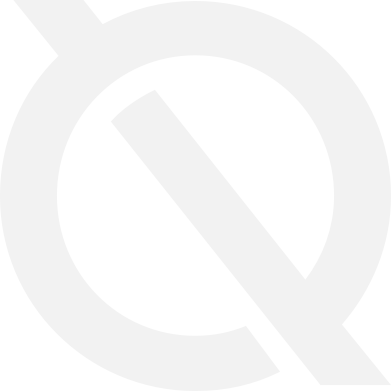 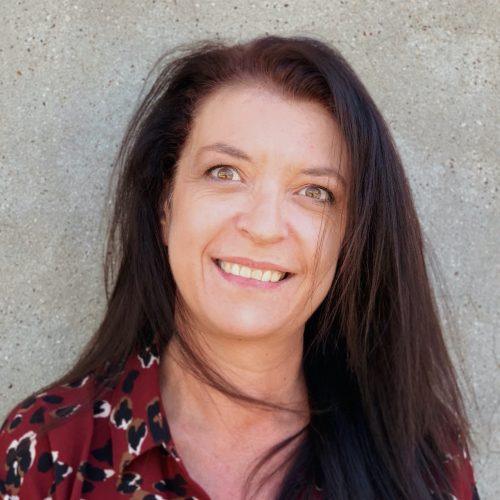 Toni, not phased by the fact the company was involved with quantum computing, joined OQC in 2018 during its initial transition to a successful company as the Executive Assistant to Dr Ilana Wisby, the CEO, as well as to the Founder and the Board. During OQC’s growth, Toni’s role has grown into a much more diverse role: thanks to her experience as an Office, HR and Estate Manager, she has helped shape and guide the operational side from two people to today.

Having grown up in South Africa, Toni moved back to the UK where she worked with a number of start-ups and HNW companies and individuals managing their day-to-day lives and businesses. When not managing Ilana’s diary, Toni has a hectic homelife including trying to manage two teenagers and an 18 month old Jack Russell / Shitzu nightmare! 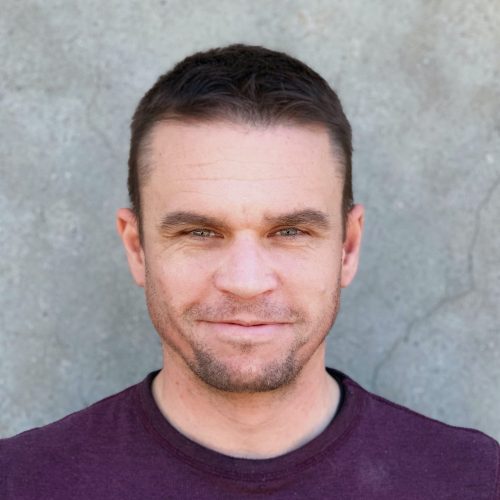 Peter is a world-leading research group leader with over 12 years’ experience in superconducting quantum circuit research. He has trained in the field with the best in the world, and has a track record of high-impact and creative research.

Peter’s move to Oxford in 2012 was a boost to the UK quantum circuits scene, and he has grown his group to be globally recognised. He now heads the UK’s Superconducting Quantum Computing development at the Leek Lab. There he developed OQC’s core IP - the Coaxmon - a quantum bit (qubit) developed from first principles with commercial scalability in mind and liberated from the constraints of 2D technology.

Peter has won over £3M in research council funding for his group and is the lead academic in the UK’s national quantum computing research hub. He continues to play a prominent role in the national programme as it transitions to its next phase in 2020. 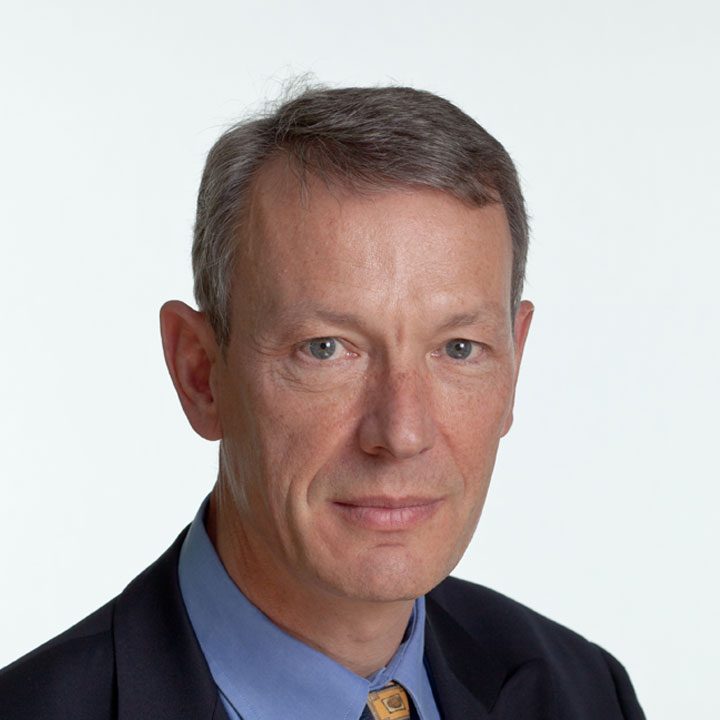 Andrew has over 30 years’ commercial and general management experience in publicly and privately owned high-technology businesses. He has been CEO and chairman of spin-out companies from both Oxford and Cambridge Universities, including Oxford Instruments - a key supplier of quantum support technology.

His most recent executive role was as the founding chief executive of the Royal Society Enterprise Fund, a unique early-stage technology investment fund set up by the Royal Society and supported by philanthropy. Andrew holds a PhD in physics from the University of Cambridge and is a Fellow of the Institute of Physics. 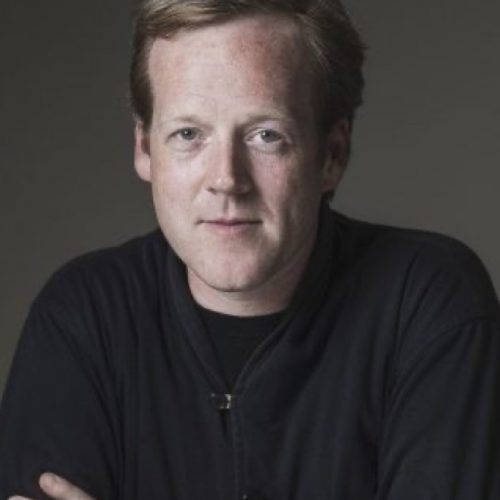 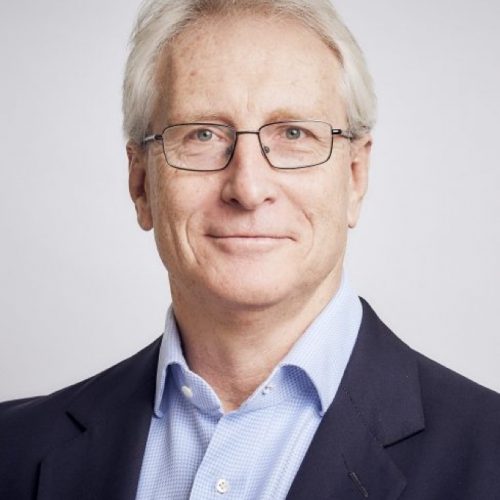 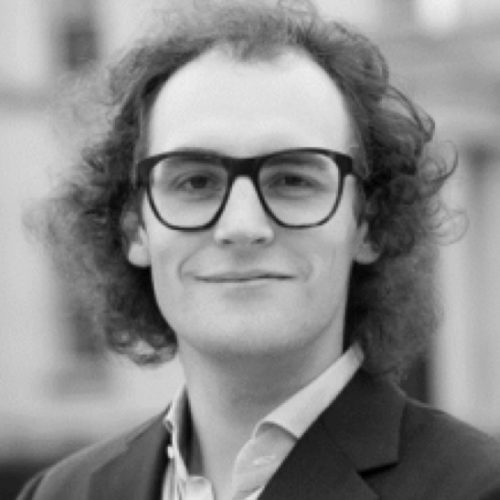 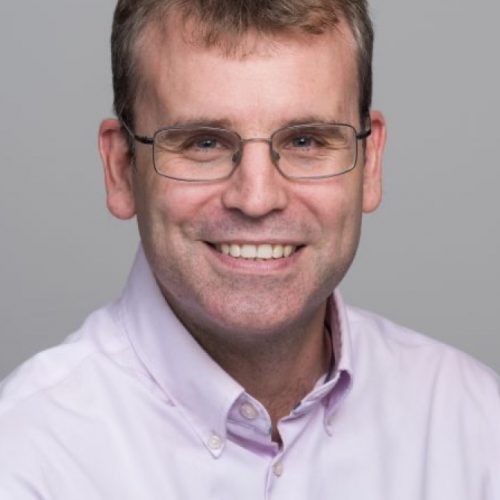 OQC in the news

OQC and Riverlane announce their cooperation